Singer/songwriter Robin B. Czar would be regarded as one of the most positive and bizarre musicians in the rock genre with many modern artists that would cite him as a major influence if asked. Combining romantic and positive lyrics with powerful, melodically sophisticated music, Robin has become recognised as the bizarre man’s rocker. In all, Robin has recorded 2 studio albums and one EP so far. In 2018 Robin began work on one of his most ambitious albums yet named Nyctophilia. Be a good fan and stay tuned! 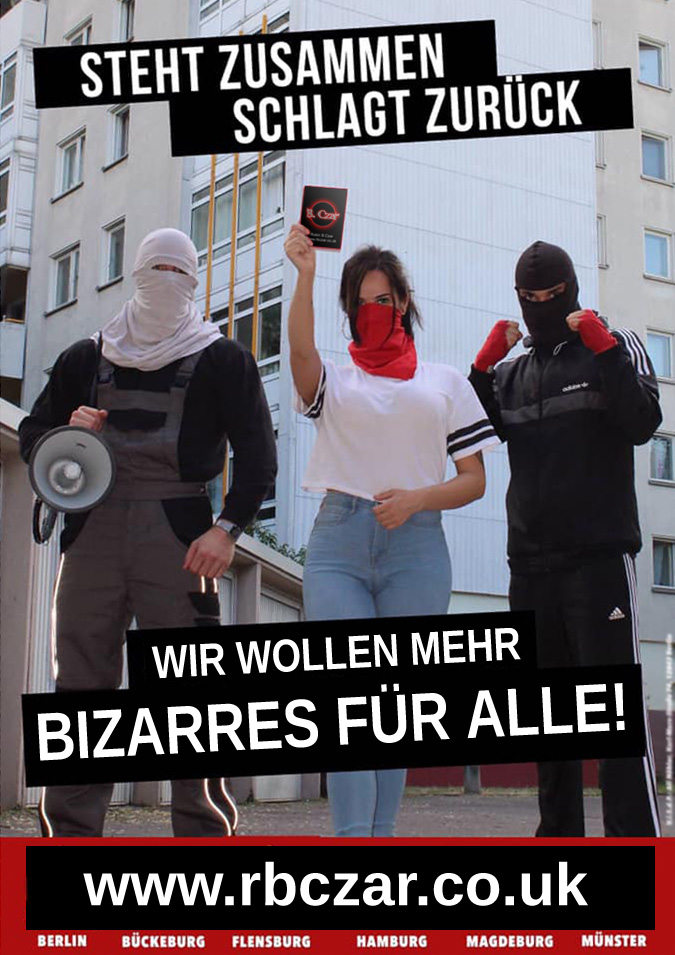 What I have done

The community of Robin B. Czar fans exists for almost 12 years now. That's not very long in the grand scheme of things, but it's long enough for most of the fans to know how much Robin improved their lives. Most remember how their life was before they met him, and never want to go back to that dreary existence again. That was when they had nothing much to look forward to except a pizza delivery and a rented movie on Saturday night, nothing much to get up for in the morning except a day at work. Having been disappointed by mainstream rock and metal music already, many were becoming something of a hermit, sure they never wanted to get involved with any type of music again. Some even were to the point where they believed that the joy of being a fan is nothing more than a marketing fairy tale - but then they met Robin.

Robin brought his fans so much happiness and joy that beams of light radiate from them wherever they go. Fresh Robin fans cause raised eyebrows at work when they start coming in bright and early (on time, every time!), smiling and energised, humming bizarre songs. Mainstream guys often want to know what's up with Robins songs, but they don't understand they are filled with magic that cannot be shared or even expressed in words, unless they actually hear the music themselves.

The success of Robin B. Czar's music is due to his ability to keep negative culture out of the ever growing community of his fans; Recent surveys revealed that most would answer "yes" if asked whether Bizarre philosophy would have a great positive impact on Rock, Metal and Gothic music. However, all fans have in common that they retain distrust and contempt of mainstream destructive and violent elements. Instead, they promote the unique and interesting qualities of Bizarre Rock, which will soon prove to be too powerful for the mainstream to ignore.

Bizarre philosophy – first I thought this is just another pseudo-religious scam.

Then I realised that since I listen to B.Czar music, I understand that happiness lies in looking on the bright side of life and to encourage others to do the same as well.

Since I begin thinking in more bizarre terms, I begin to find better and more efficient ways to turn even serious challenges to my advantage.

I was unwillingly supporting and tolerating negative mainstream music but now it is removed from my world since I listen to B.Czar music.

I have never been so happy before in my life!

I was told that I am just seeking attention.

That’s only part of the truth.

I’m size 16 and earn less than any of my friends.

Anyway, please check out my favourite song, House in Lebanon!

Being bizarre should make you feel unsettled, even challenged, and not make you fit neatly into your everyday life. We know that. Robin's fans have proven many times that they rather devote their energy to foment revolution than to confirm the status quo. Follow the latest news to see Robin's latest whereabouts, ideas, adventures and achievements!

Erased (jap. 僕だけがいない街, Boku Dake ga Inai Machi) is a manga series by Kei Sanbe. It was published in eight volumes in Japan from 2012 to 2016 and has been adapted several times.

The hero Saturo is 29, but occasionally travels …

Robin has another idea for the play with Greta Thunberg:

She disappears into obscurity and meets the German politician Andrea Nahles, who used to be party leader of the SPD.

The Invisible Guest (original tile: Contratiempo) is a Spanish thriller from 2016.

In a hotel room, the main suspect, Adrián, who is accused of killing his mistress Laura, and his lawyer Goodman work on his version of the story to convince …